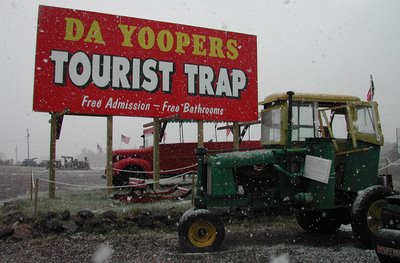 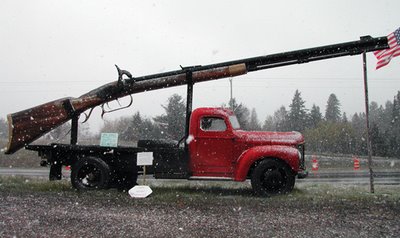 Even among the Northern-most residents of Michigan’s lower peninsula, there is talk about “da yoopers”–those folks that live in Michigan’s upper peninsula. The U.P. is another world filled with self-referential humor and unabashed love of hunting, the outdoors, and drinking. It’s rural America with a weird sense of humor.

And it’s got TONS of Roadside Attractions! One of my favorites is Da Yoopers Tourist Trap and Museum–free admission and free bathrooms. And those bathrooms flush, I tell ya, unlike many of the rest stop restrooms that litter da U.P!

What was I doing at Da Yooper Tourist Trap? Just my honeymoon! I love a good roadtrip and my husband loves to drive aimlessly. We’re a good match. 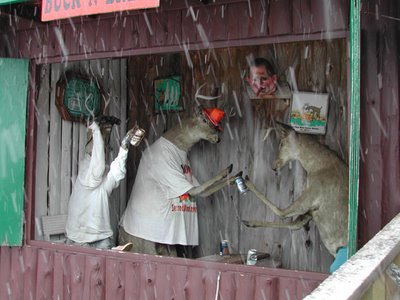 Anyway, you can check out Da Yoopers Tourist Trap with plenty of pictures here.

Included in the free museum is a series of bizarre yooper scenarios, my favorite involving the two deer turning the tables on a hunter. It’s so beyond weird. I love it. And my uncle is a taxidermist so I respect the craftsmanship, too!

There’s plenty of other photos on their site. It’s right on US-41 West in Ishpeming. It was a late fall day when I visited and took these photos in 2002.