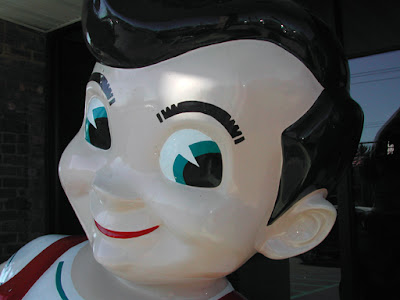 I consider Big Boy a real slice of American culture. And I don’t care who knows it. It’s about a chain restaurant with kitsch and what could be better than that? I heard a radio show a few years ago that asked callers if they every swiped something big–as a prank–and what happened to the item? At the time, I think huge Spongebob’s or some such character were being stolen from Wendy’s or Burger King. At any rate, one caller said she had a genuine Big Boy in a toolshed in her backyard! Her husband and his friend swiped it in college and then didn’t know what to do with it. So they hid it in the garage! And he moved it under cover of darkness to his toolshed, still unsure what to do with it 10 years later!
At any rate, Big Boy corporate called and offered them amnesty. They could return the Big Boy–no questions asked. The corporate rep noted that making Big Boys was very expensive and that often franchise owners did not want to pay to replace lost Big Boys so the iconic image was on the decline. Sad! I took this picture because we went to Big Boy all the time when I was a kid. And I haven’t seen a real Big Boy statue since I moved from Michigan. This one was near my apartment in Rochester Hills.