NOTE: This was the first page I read of all of Russâ€™s letters. I picked it up, read the first paragraph and was like: OH, YES, I WILL TAKE THIS WHOLE BOX.

He picks up directly from the last letter and declares this to be page 8!

HE SPELLED THIS CORRECTLY. It means, â€œHow are you?â€

â€œLove is a many splendored thing.â€ Did you know that? Somebody wrote a song about it. 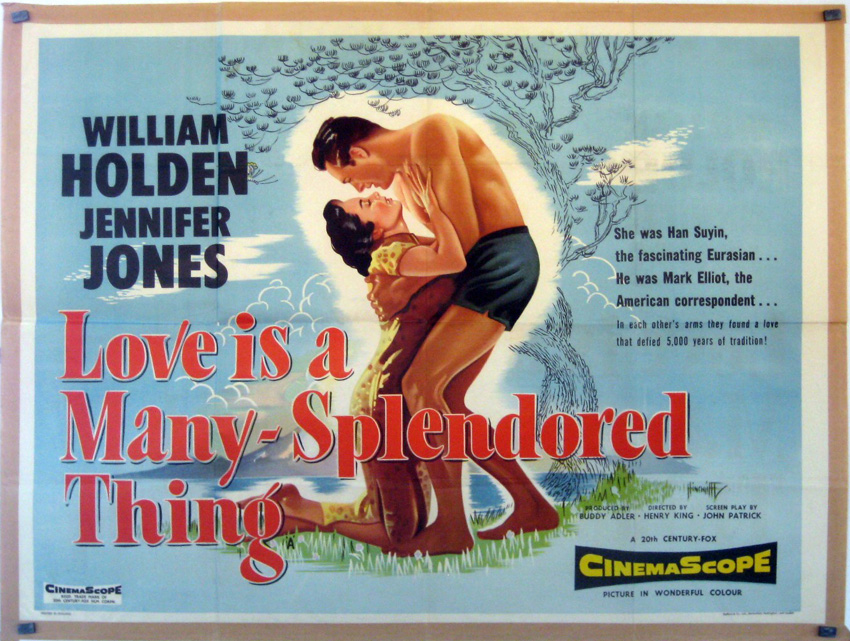 Did you know it was a song from the movie, made in 1955â€¦ and filmed in CINEMASCOPE.

Love is great except for me, because the object of it is 130 miles away, which places a very effective damper on the majority of benefits, especially the tangible ones. I may haunt you before next week-end.

Now Iâ€™ve broken the precedent of closing letters talking about love. Iâ€™ve opened one with it. I didnâ€™t break the precedent â€œon purpose.â€ I just felt like it. You are on my mind.

This is going so well. Heâ€™s gonna ruin it.

Some obviously mis-guided, bigoted, uninformed sensationalist called Jane Goodsell wrote an article in The American Weekly in which she â€œbeat the drums and blew the hornsâ€ for the poor, undernourished, mistreated, enslaved, but typical housewife.

From her point of view, she has been unwillingly forced into a situation called marriage by the heinous machinations of an unethical husband.

Or just the constraints of a patriarchal culture?

She must tolerate him. Men are obviously not worth the time of day but are to be treated with care and left unmolested. They are universally thoughtless, unkind, self-centered and have no inherent intelligence.

I mean, this has been my overall experience but YMMV.

Women are the Rocks of Gibraltar in every household. They are not upset by anything and take everything in stride. Men are children and need constant attention and enlightenment. Men are hypochondriacs and always think theyâ€™re sick. Women never worry about being sick. All symptoms are brushed off without a momentâ€™s hesitation. They appear helpless occasionally only to keep their husbandâ€™s happy. Apparently, men have value only for stud purposes. They can perpetuate the race, even helping to create the ideal human being, a woman. This is their only excuse for existence.

Remember when I said itâ€™s nice to know that the headline news of the day rarely matters in the long run? Weâ€™ve come a long way since Russâ€™s day and yet weâ€™re still dealing with the same crap. This whole letter makes me tired.

Similar articles have appeared taking the opposing stand. Why such extremes. The article wasnâ€™t, although it should have been, written in a facetious manner.

I looked up Jane Goodsell, and from what I can tell she was like a saucy Erma Bombeck in 1960, so I bet it was written at least somewhat satirically. Millennials: Google Erma Bombeck. Weâ€™ll wait.

If all these things are true why the â€”â€” do women bother getting married.

Because they didnâ€™t have access to birth control pills and couldnâ€™t get hired at jobs they were just as qualified as boys to do, so they couldnâ€™t take care of themselves? Has Russ never seen Mad Men?

Certainly it isnâ€™t out of altruistic desires to perpetuate mankind. That is no problem and does not require marriage if that is the only end for marriage.

However, itâ€™s not true and there is no basis for the childish evasion of reality comprising the essence of the article. Why assume any â€œbattle of the sexesâ€ and proceed to stimulate and improve on it. Why draw such a line between the sexes and proceed to place men and women at the extremes of this territory.

Russ is so the Millennial guy who tells you heâ€™s a humanist but not a feminist because he believes in equality for all.

This so-called â€œbattle of the sexesâ€ is an imagined excuse for all kinds of slams against other people. People seem very anxious to find some basis for division between themselves and others and sexual differences do not escape notice. Apparently the more the merrier. The objective seems to be find an opposite in everybody so that you can attack them, saying Iâ€™m good, so you must be bad.

Hillary Clinton was 13 when this letter was written. I wonder if she read Goodsell’s articles?Â

A long list of opposites is needed to â€œhave something for everybody.â€ Sex is good because it takes care of half the population (roughly) in one sweep and consequently cuts the bigotry proceedings to half the work.

Russâ€™s penmanship sucks in this letter and he is dropping a lot of words and has quite a few scribbles and Iâ€™m thinking he was drunkenly pontificating here.

The newspapers are always happy to please the people. What is unfortunate is that many individuals read a thing like that and, since it compliments their egos and is presented in a logical if falsely assumed manner, supposedly representing the norm, they believe it. Since the views of their opposites is distasteful, they develop a certain amount of superiority to their â€œopponents.â€ Being basically irrational and emotional, the inevitable result is dissention.

I have NO clue what that last word is meant to imply. Also, is he actually calling women irrational or emotional? I need to lie down before I get all hysterical and have an emotional reaction to Russâ€™s logic. Heh.

Certainly, articles like these do not cause, but they do irritate, unhealthy relationships. They provide emotional fuel for the argument and verbal battle. They require defense. And offense-defense situation leads to only one thing, â€” a victor. The loser is resentful. What value is there in creating situations where someone must defend himself. They cause a circumstance of argument.

LADIES, STOP MAKING RUSS UNCOMFORTABLE WITH YOUR DESIRE FOR BIRTH CONTROL AND JOBS AND AUTONOMY!

And, most important, why create these things with fallacious material. For this I can find no excuse. The editorial policy of the Chicago American and many other newspapers as well is obviously deteriorating.

LOL, you havenâ€™t seen nothinâ€™ yet, Russ. Iâ€™m going to send a gender fluid teen to your house to give you these letters back.

They take such great concern in the divorce rate in this country, and yet feel no compunction in providing a reference source of emotional insults for a domestic argument.

â€œMental crueltyâ€ is the most frequent grounds for divorce and the â€œbattles of the sexesâ€ is the greatest contributor to that. Typically, the case of the mistreated, over-worked wife who is being led into a battle by the press, radio and TV.

I almost picked a way more brutal gif from this seminal TV movie, but just imagine Farrah Fawcett getting the shit beat out of her by a man so I don’t have to keep seeing it as I work on this letter.Â

Repetition is an effective form of indoctrination and if domestic battles as a primary result of marriage is repeated often enough it will at least be assumed by many to be almost requisite in marriage, which is far from a rational assumption and completely unnecessary in our society. Stressing compatibility would be a better course of action.

I totally agree: Marry someone you are compatible with! But also: I bet a bunch of housewives were unhappy in 1960 because they wanted something else and never got a shot at it. They were probably especially unhappy because a bunch of them (and/or their sisters and mothers) got to work and got a taste of freedom during WWII.

Making incompatibility seem distasteful might destroy a great many useless television shows which depend on incompatibility in marriage for their humor, but at least no stimulus would exist to lead people to think that incompatibility is really funny and far from serious.

The Top 10 TV Shows of 1960 barely featured any women and were largely westerns (!): Gunsmoke, Wagon Train, Have Gun â€” Will Travel, The Andy Griffith Show, The Real McCoyâ€™s, Rawhide, Candid Camera, The Untouchables, The Price Is Right, and The Jack Benny Show. The only shows I could figure that were about the battle of the sexes in the fall of 1960 were The Flintstones and The Many Loves of Dobie Gillis. The #11 show is the first one to even have a main â€œmomâ€ character (that isnâ€™t dead): Dennis the Menace. Did you know The Honeymooners (pictured above) only aired for two years and a total of 39 episodes and was canceled by 1956?

And now youâ€™ve been more or less forced into reading another uninhibited essay on a ridiculous issue which really doesnâ€™t concern you.

But now that Iâ€™ve written it, someone has to read it and the letter is yours. Q.E.D. you have the dubious pleasure.

Karen, me and the 10 people who are reading these are shaking our collective heads at the idea that the state of women in 1960 doesnâ€™t concern poor Karen.

I am going to finish this letter in a canteen over Sunday supper.

I have never written a letter in the canteen before, although many others have participated in this great sport. And sport it is, because itâ€™s a constant competition between writing the letter and being distracted by people milling around. Donâ€™t expect too much from this section of the letter.

But when the printed page becomes a blur of black and white and oneâ€™s pen begins writing personal insults and invitations to stop studying then a break is in order. Actually, this is an exaggeration (profound statement!), but very often this is nearly the case.

The music played in here by the students seems to alternate between fine and positively unfit.

Apparently, we have here the freshmen and upper classmen contrasted. A certain allowance must be made for those who, in high school, developed bad taste, and have not yet outgrown it. Some freshman are good student (college level, the only level on which there are true students, of course) material, but they are in a definite minority.

His fixation on being cooler than the lowly freshman still cracks my shit up.

Re: Next weekend. What time does the dance start? Thatâ€™s all for now. Every time I think about next weekend I want the days in between to go a little faster. Only 5 days till D-Day (i.e. Dream-day. Ok, so its corny, but I mean it anyway.)

This weekend was better than last. Partly because it was the first chance Iâ€™ve had to relax all week and partly because my parents came down. We had a very enjoyable day yesterday.

Heâ€™s close to his parents and has a great girlfriend, but he canâ€™t figure out whatâ€™s good about the world. I hope his angry young man nonsense faded and he figured out the plot.Â

Would you prefer shorter letters?

Yes. Today I would.

Seriously. These letters often retrogress into nonsensical babbling, which can be very distasteful. Would you rather have shorter letters which come to the point and say things without excessive elaboration? Personally, it doesnâ€™t bother me to write long letters, but you may appreciate the shorter variety, which donâ€™t repeat themselves over and over again. Please give answer. Iâ€™m really in a poor position to judge them objectively and favorably. Naturally, they are nothing new to the author.

You guys, I seem to have lost the last page of this letter! Maybe I threw it out in a fit of rage because it took me like two weeks to transcribe this letter? Maybe itâ€™s sandwiched between two other pages somewhere? If I find it, Iâ€™ll update here!