I have high hopes for this letter, you guys.

This is the letter I mentioned in the typed “essay.” It was in my lecture notes folder, and that’s why I couldnâ€™t find it right away.Â I put it there with the intention of working on it during my lab yesterday. An intention which obviously did not materialize.

I listened to the Kennedy-Nixon debates this evening. Sen. Kennedy disappoints me. He is still beating the drums for leaving Quemoy and Matsu for Red China when the smallest aid to the Nationalists could stop it. He advocated supporting â€œonly our commitments.â€ This means for a big bloody war on like North Korea only on Formosa.

Russ. Russ, Russ, Russ. How do you lure me in with the promising start of â€œFemme Fataleâ€ and end up making me Google the long-forgotten Cold War flashpoint of Quemoy and Matsu? Itâ€™s fun to confirm that the news of the night rarely matters in the long term, isn’t it? But! Letâ€™s take this as a learning opportunity, shall we? Come with me, nerds (more here): 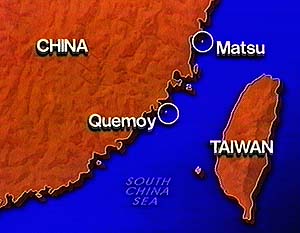 The Quemoy-Matsu issue was first raised in the second [Nixon-Kennedy] debate on October 7, 1960. Disagreement between the candidates was instant. Unlike any other single issue, Quemoy and Matsu continued to be a bone of contention well into the third and fourth debates on October 13 and 21, 1960. Throughout the debates Kennedy reminded the American people that Nixon might actually risk military action to defend Quemoy and Matsu even in the absence of an all-out attack on Taiwan. By pointing out that Nixon would commit the United States to defend the offshore islands as a matter of principle, Kennedy was able to paint Nixon as dangerously dogmatic and unyielding in a very uncertain situation; he also emphasized that Nixonâ€™s position was inconsistent with the Eisenhower Administration in which he was then Vice President.

The American people, concerned about the potential for war, understood the divergent positions on Quemoy and Matsu offered by the candidates and this understanding contributed to their acceptance of Kennedy as a calm and thoughtful leader they could trust.

So, what did happen to Quemoy and Matsu? Fifty years after the Kennedy-Nixon debates, Quemoy and Matsu are still in the hands of the Republic of China on Taiwan. Because of the relaxation of tensions between the Peopleâ€™s Republic of China and Taiwan [side note to this side note: twelve years after Russ writes this letter Nixon will usher in normalization of relations between the U.S. and the PRC], the military presence on both Quemoy and Matsu has been reduced substantially.Â Both islands have become destinations for tourists from both the mainland and Taiwan. And, as a reminder of those turbulent times of the 1960 presidential debates, the extensive fortifications and tunnels constructed to defend the offshore islands are now major tourist attractions. Quemoy and Matsu, flash points during the Kennedy-Nixon debates, never flared up.

I never expected to learn that this week. Neat! But back to Russ:

Not even Kennedyâ€™s running mate, Johnson, agrees with him. Kennedy just wasnâ€™t able to find a leg to stand on. Several times he called Nixon a liar and proceeded to support Nixonâ€™s viewpoint. 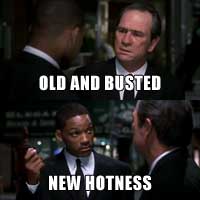 This is also a fun spin on the idea that those who listened to these debates on the radio thought Nixon won and those who watched on TV thought Kennedy won. No question TV changed things. Thereâ€™s no getting past the fact that, since 1960, New Hotness always wins over Old and Busted.

Kennedy also repeatedly asks everyone to â€œlook at the record,â€ but only from 1952-1960 when the Republicans were in power. Eight years and they havenâ€™t been able to clean up the mess. But the mess was caused between 1932 and 1952 when a Democratic administration gave Germany everything and then gave the Russians the same thing and threw in the kitchen sink. While Czechoslovakia, Hungary, Poland, Lithuania, and East Germany, to name a few, wanted to be and were free and independent countries we, led by the Democratic administration, allowed the Russian forces to occupy these countries. Countries which were not even deserving of occupation.

Wait, which countries are deserving of occupation? Unclear, but something tells me that Russ is a Republican and, at this point in his life, quite a partisan. Just a guess! But itâ€™s funny how, even in 1960, a partisan has to reach back several years to make sure their rival party are The Ones Who Caused All These Problems. Some things never change, I guess?Â

They took no part in the war and certainly should not have been placed under domination. West Germany and Austria are free and independent. And we have backed out over and over again while communism grows bigger and bigger and we get closer and closer to war. 1942 all over again, only twenty years later. Just about 1962 Red China and/or Russia will really get in gear. Conditions are just about what they were in 1940.

Let Red China have Quemoy and Matsu. Then theyâ€™ll be satisfied. Sure they will. Itâ€™s about time the United States threw some of its weight around and illustrated some of its superiority. Enough politics.

No mail today. Iâ€™m going to have to start sending out my letters daily. Like the beginning of this one could have been mailed out. I am going to adopt this policy. You, of course, will be the first to find out.

I caught up on some of my other correspondence also. This will result in more letters which will put me further behind. Sort of a vicious circle. Maybe Iâ€™ll just limit my letters to you.

That way, Iâ€™ll only have one letter to write per day. I do write to you every day even though you donâ€™t receive one every day. Thatâ€™s something anyway. Will find out what my Chem. hourly performance was last Wednesday tomorrow in my quiz section. Iâ€™m hoping for the best. This one I want to make good on. If I can pull a â€œBâ€ Iâ€™ll be happy. If I can pull an â€œAâ€ Iâ€™ll be overjoyed.

My compliments to the fine culinary skills of the K__ household. You must have had some part, a large one, in the making of these goodies, which I am again sampling while I write this. Thatâ€™s why they taste so good. I know something that tastes even better, however, but is not filling in any way.

But you have to be here for those. Canâ€™t get enough, though, my appetite for â€™em is never satisfied. Yum-yum. The supply is much more bounteous also. Enough or Iâ€™ll leave for Chicago tonight. Believe me, the temptation is very strong. WELL, I think we have a better idea of What Happened at Homecoming, and Iâ€™m gonna go ahead and forgive him for that â€œyum-yumâ€ business. If you can’t, I won’t hold it against you.

Well, the sandman calls and I do have a couple classes tomorrow. Good night, sweetheart, sleep tight and if you dream, dream of me. Take real good care of yourself.

I wonder what Russ did when he finished this letter. I bet he took real good care of himself.